Mechanic kills friend for urinating near his shop 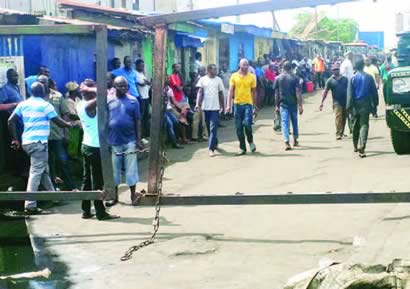 Tragedy struck the park of the Association of Maritime Truck Owners in the Berger, Mile 2 area of Lagos as a a mechanic, identified only as Oshare, reportedly stabbed his friend to death and injured several others.

Rasta, Oshare's friend allegedly urinated beside a stationary truck. Oshare, reportedly challenged the deceased for messing up the spot, said to be a few steps from his shop. As Rasta tried to calm him, he reportedly slapped him, which led to a fight.

The mechanic, who got so angry grabbed two bottles and stabbed the friend in the neck. He was also said to have injured some people who attempted to caution him.

Rasta reportedly bled from his injuries and he was rushed to a hospital for treatment. He, however, died before he could get help.

"Both of them are mechanics and friends. He confronted Rasta for urinating near his shop and it led to a fight. Oshare rushed to my shop with two bottles in his hands, asking me to give him a knife. He was so angry that he was shaking. I pleaded with him to let peace reign, but he refused and left when I did not give him the knife"

"He chased Rasta around the park until he stabbed him to death in the neck and back. He also attacked those who wanted to collect the bottles from him. I have never witnessed such thing before. It was as if he was possessed."
‎
The spokesperson for the Lagos State Police Command, SP Dolapo Badmos, said Rasta's corpse had been deposited in a morgue.

"Information at our disposal revealed that one Oshare and one Rasta engaged each other in a fight with knives and bottles, leading to the death of Rasta. Operatives rushed to the scene and arrested Oshare. He is unconscious and in a hospital for treatment".

By Olufowora Olorunleke March 13, 2016
13 year old Alfe Patten, a British citizen who is just four feet tall and looks even younger than his age has now become a proud father of a baby.

Report says Alfe might not be the youngest father so far as Sean Stewart from Sharnbrook in England became the father of a baby boy at age 12 in 1998.
Post a Comment
Read more